Experience gained by Mr Szpinda during many years of learning as well as training had an impact on main areas of activity of the lawyer’s office. The staff working in the office, which was set up in 1995, focus mainly on providing legal services relating not only to economic relations but also to defence in criminal cases. Moreover, the staff represents parties injured by an offence.

Within a short period of time, Mr Szpinda has gained trust of many entrepreneurs as well as institutions. As a result, he became a legal adviser of many leading entities in the region. He has also been awarded with a function of an official receiver, a liquidator and a chairman of a supervisory board in a number of joint stock companies and/or limited liability companies – including those with participation of the State Treasury.

Apart from working professionally, Mr Szpinda also engages actively in work in bodies of the autonomy of the Bar.

From 2003 to 2007 Mr Szpinda was a member and a treasurer of the Regional Bar Council in Koszalin. Since 2010 he has been a chairman of Koszalin Bar Council Audit Committee.

Moreover, Mr Szpinada is also an inspector, a lecturer as well as an examiner of barrister’s trainees on issues concerning commercial and criminal law.

Katarzyna Siudak – Head of the Secretariat 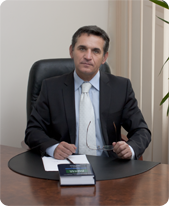